Hiking Club’s final hike of 2018 was in Nightmare Gulch of Red Rock Canyon State Park. The ten-mile loop hike we did today offered a fun cross-country dayhike through the most interesting badlands this side of Death Valley. 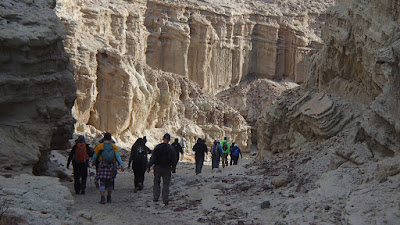 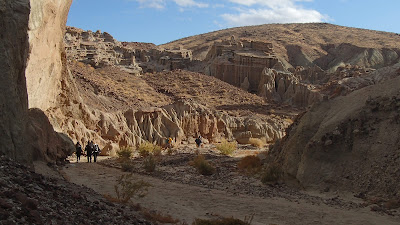 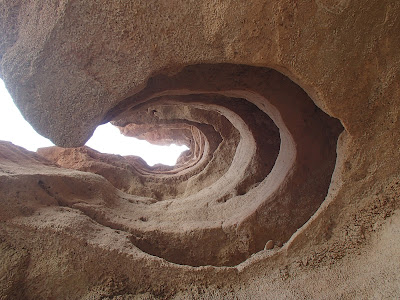 An interesting erosional feature that I call ‘the downspout’. This was formed by differential erosion of the various soft layers of volcanic tuff by runoff 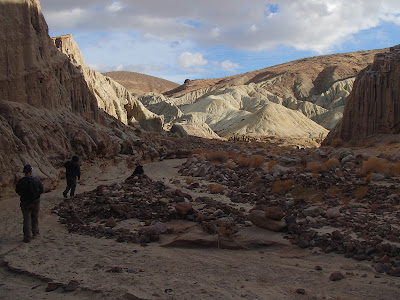 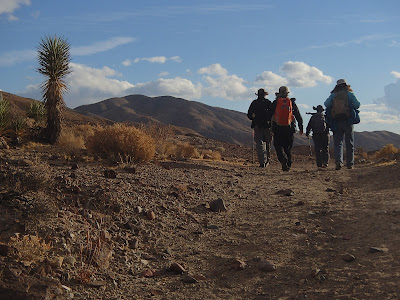 In the last two miles or so the drainage opens up into a wider valley.  The hike out in the low sun was beautiful.
at 12:04 PM No comments:

So we had about 24 signed up for a night hike above LA but with all the smoke in the air there was just seven of us that showed.
For 24 hrs the offshore wind stopped, and the onshore flow normalized, causing all the smoke over the ocean to drift back inland over LA.  We could spot absolutely no fires burning in the distance, but they resumed the next morning when offshore wind restarted.  The good news is, the Pacific Ocean makes a pretty good firebreak. The bad news is for you if you picked the Malibu coast to live, given that this exact scenario plays out every couple of years.
at 1:13 PM No comments:

If I had my tripod these photos would be less blurred but the night was utterly clear and dry, and the view of the San Fernando Valley was great.

The Vandenberg range is about 115 miles west of here, and the mountaintop park on the west side of town makes an ideal place to watch them go.  I could watch as the Space-X rocket ascended into the sunlight, then its first stage return to the base after separation.
Oh, and my buddy Paul could see this launch from Phoenix, which is pretty cool.

September 15: Hiking Club on peaks in the San Gabriels 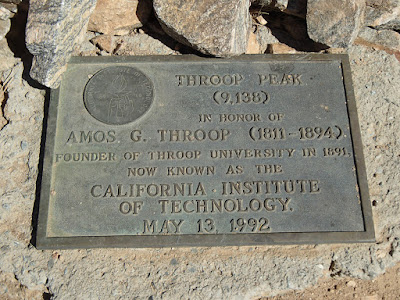 Labor Day Weekend I visited my brother in Denver, then spent the next week driving down thru central Colorado to Taos and Albuquerque.  My idea was to climb one of the Collegiate Peaks in the Sawatch Range on the Continental Divide.  Plan was to stay two nights in Buena Vista, climb Mt Harvard, then climb the highest peaks in New Mexic, which are clustered above Taos.  I dropped off the car and flew home from Albuquerque.

But upon waking up the peaks displayed a dusting of snow. This didn’t make 14421’ Mt Harvard impossible, but summit conditions would be a frozen whiteout with wind and no view.
I stopped for lunch at the cloud ceiling at 12400’ Bear Lake - my turnaround point. It was a dramatic day for photos and instead of feeling cheated, I enjoyed the opportunity to hike again over Colorado tundra.
On the return I met a young hiker with a PCT patch on his pack.  I inquired, he said he hiked the trail in 2017, and in short time we were discussing common friends.

South of Buena Vista a low divide separates the Arkansas drainage (which ends up in the Mississippi) from the Rio Grande headwaters, which drains straight south thru New Mexico. So I’d forgotten about Zebulon Pike, but while Lewis & Clark were yet on their way home from the NW in 1806, Thomas Jefferson sent Army Lt Zebulon Pike to explore the southern Louisiana Purchase by following the Arkansas River to its origin in the Rockies.

They followed the drainage beyond his 14000’ namesake peak,  then ended up wasting time traveling in a big circle, then not far from this roadside display, on land that had been New Spain for a hundred years already, they found themselves under foreign jurisdiction, earning them a forced escort to the Chihuahuan capital city by Spanish troops.  There the governor released them, as Mexico was not at war with the US, but Zeb and the boys then got escorted all the way back to Nachitoches Louisiana, and didn't even get overtime pay.  Kind of a bummer trip, not as inspirational as the Lewis and Clark story, which is why you didn't learn about it in history class.  Anyway, Pike's expedition stumbled into Spanish territory thru that low notch in the Sangre de Cristo range:
Yeah, and they remarked about the Great Sand Dunes in their journal.

I wanted to hike to the 750' high summit dune today, but didn't have time.

I drove another two hours south to Taos, where I met my friend Nina for some hikes.
The Sangre de Cristos form the tailbone of the Rocky Mountains, where the range finally peters out around Santa Fe -  but not before presenting several 12,000 - 13,000' peaks. We climbed 13,161' Wheeler Peak, the highest in the state, and four attendant peaks.  It was a five peak day! 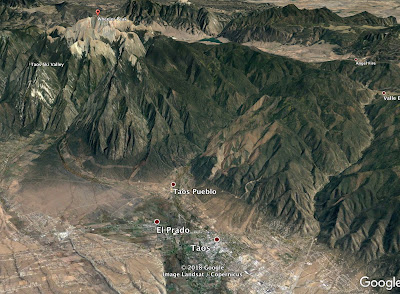 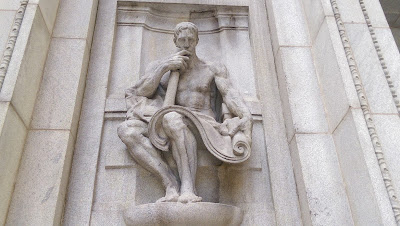 July 7 in the South Sierras

One of my favorite dayhikes in the Sierras is the 15-mile loop from the Cottonwood Lakes, cross-country over the summit of Cirque Peak, down to the PCT, and return through Horseshoe Meadows.

Kev
I've led our hiking club at work since 1997, with members from all over Southern CA. I also volunteer with the Pacific Crest Trail Association as an Area Coordinator in LA County, and since 1998 maintain the local PCT as a member of the Southern California Trail Gorillas.