A beautiful day with Friends Mark and Barbara on a ten mile hike in our beautiful Topanga State Park.
at 6:51 PM 1 comment: 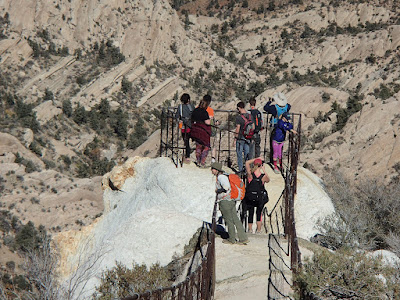 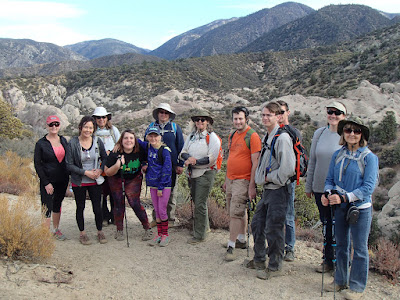 Our November hike was 7 miles at Devil's Punchbowl County Park, on the north side of the San Gabriels. Weather was perfect, sun wasn't hot, and a good time was had by all. I hope the day was as good for the other 12 as it was for me.
at 8:41 PM No comments:

Our October hike coincided with the full Hunter's Moon, and this month the Honda Hikers joined us for a big group of 28! We climbed Mt Lowe in the foothills above Pasadena just as the weather changed, and we got some great photos.

I got in one final Sierras trip, to climb 12900' Cirque Peak at the head of the Cottonwood Lakes basin. I ascended cross country on the north face, up about a thousand feet of scree and boulderfield, before summiting and descending the southwest slope to the PCT and Chicken Spring Lake, returning through Cottonwood Pass. On the summit was a Meetup group who took my picture. 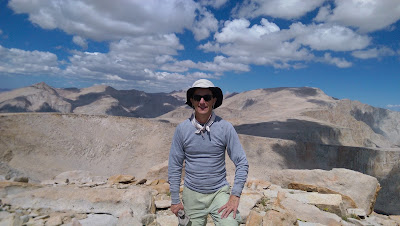 The entire loop is almost 16 miles. I made this same hike in 2007 and liked it enough to redo it. It was a great day for climbing in the Sierras, and afterward I had a room waiting for me at the Dow Villa in Lone Pine.
at 3:45 PM 2 comments:

OK then, the fastest ultrarunner has finished the 212 mile John Muir Trail in under four days. By the time we finish we'll have taken seven years (about 55 trail days). But in breaking it up, and with the connector trails, we'll have hiked over 360 miles and seen a lot more of the High Sierra. Honestly, thinking back of all the connector trails we've used, how few people we've seen on the passes, and how pretty the valleys were that lead us to and from the JMT, it's all just as great.
Next year's segment will be eight days, 68 miles, five high passes (four are around 12000'), without resupply. We'll parallel the high wall of peaks named the Palisades, in Kings Canyon NP.
at 6:09 PM 1 comment:

This year's JMT trip was shorter than others, at 40 miles, but we were able to fashion a five day loop trip with just a one-mile car shuttle. The segment that we needed to close was the 15-mile stretch between Half Dome and Cathedral Lakes. Weather was perfect, mosquitoes were rare, and we visited three of the High Sierra Camps along the way (Vogelsang, Merced Lake, and Sunrise).  80% complete now, next year will finish the trail with a 68-mile trip between South Lake and Onion Valley in 8 days, without a resupply.
Mark posted his best shots here.

Cataract Canyon is the last major segment of Colorado River whitewater that I hadn't paddled yet, and in 2013 I set up this trip, but then couldn't go. Five in the group still went, and raved about it. So I was waiting for at least an average snowpack year to reschedule. This time our group was eleven, mostly Hiking Club members, and I booked us a paddleraft trip.
Because flow in Cataract Canyon (the segment between the Green River and the Dirty Devil) is unregulated, springtime flow usually peaks at about 40000 cfs, making the rapids some of the biggest in North America, for a while. Really big years might see 70000cfs, so last year I planned this 5-day river trip for about ten days into June, which ended up perfectly timed. For three days, the flow peaked at 46000 cfs, and we nailed it exactly.
Five of us added extra days onto the trip for hiking in Bryce Canyon NP, Escalante NM, and Arches NP before meeting up with the others in Moab.


The day we were in rapids, the flow in Cataract Canyon peaked at 46000cfs. Average flow in Grand Canyon is probably around 16000cfs, for comparison. It's big enough that most trips only run motorized boats thru Cataract. As it turned out, our two paddleboats were the only ones in Cataract on that day, all the other boats were motorized.  As we pushed off the banks, a lot of the other crews on the river were pulled out, and watched us go through from ledge perches above. I know I'd have wanted to watch! In fact our guides had never guided paddleboats thru Cataract at water that big.
There was a pair of wooden dories that endo'd in Satan's Gut, wrecking them both. They were on the last afternoon of a 13 day trip. Luckily nobody drowned. We found the dories lashed to a giant S-Rig, later duct-taped together, to get them out, but the boats' structures were crushed. Our two paddleboats made it through, with only one swimmer getting washing-machined through Satan's Gut, and he was the guide! It was all good though and a great time was had by all.
Here's my one-minute iMovie version of the GoPro footage.

Kev
I've led our hiking club at work since 1997, with members from all over Southern CA. I also volunteer with the Pacific Crest Trail Association as an Area Coordinator in LA County, and since 1998 maintain the local PCT as a member of the Southern California Trail Gorillas.